Black Sheep aka Dwayne Roberts is the leader and CEO of the Paper Heroes. He used his trust fund money from being the seventh son of the Dope Duke of Scottsdale. A world renowned rapper and media mogul who created such dope hits as “Parents don’t Relate” and “99 Quandaries” all mid western grandma friendly pop we’ve all heard and loved! He hopes to gain respect from the world out of his fathers shadows as the Black Sheep hero to the underprivileged, that still collects from a trust fund. His sidekick is the erstwhile and absent minded John Delong. A mild mannered Polymer Studies student that stumbled upon a polymer that allows anything inside of it to streeeeetch… pretty far. He subsequently spilled it on his long underware and forgot the formula and that’s how he became Long John the Long underware of the law. Though most of his heroic endeavors involve getting Mittens out of various trees. That cat likes to climb.

Matthew Meteor hails from the planet Mo-Ron. He accidentally crashed into Paper City where he incurred many fines from the city for the damage he caused and was served papers by Captain Hawk for copywrite infringement as his costume is way too similar to his. Faced with legal fees he’s joined the Paper Heroes Agency and he represents their best chance of being able to do something cool. Instead of doing crowd control at some other super teams parade which is usually their biggest gig.

The Mysterious Miss Tori she has magic powers that know one knows exactly what they are, least of all her. 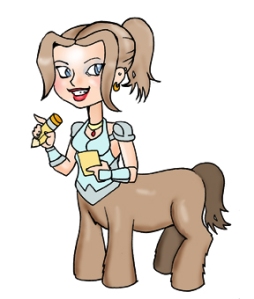 Secretariat half horse half secretary Secretariat answers the phones and doles out assignments for the heroes to attempt to temp.

” In smelliest odors, in blackest night,
No mess shall escape my sight
Let the dirt of evil’s very worse blight
Beware the power, of my mops wipe!!! 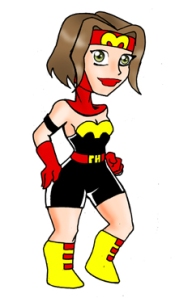 The psychic Muse is the career counselor for Paper Heroes.